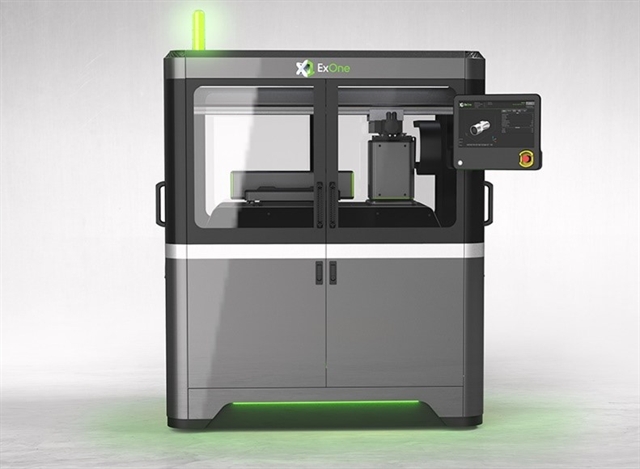 The InnoventPro will constitute the entry-level printer in ExOne’s family of production metal binder jetting systems, which also includes the X1 25Pro and the X1 160Pro. According to ExOne, the InnoventPro targets academics, researchers and manufacturers of all scales who are looking to produce quick metal parts.

“We’re taking some of the innovations we’ve had at the mid and upper level of our product range and moving them into the new InnoventPro,” commented John Hartner, CEO of ExOne.

Like all additive manufacturing techniques, binder jet 3D printing builds up a 3D object layer by layer. But unlike other techniques, binder jetting does not require base plates or support structures. The technology was developed at MIT in 1993, and in 1996 ExOne was granted an exclusive patent to its use. While this patent has since expired, ExOne has more than 230 active and pending patents related to binder jetting.

Binder jetting begins with the deposition of a very thin sheet of powder on what’s called the powder bed. The powder material can be metal, ceramic, sand or composite. ExOne currently has 22 certified powder materials for its printers.

Once the powder layer is deposited, the technique’s namesake—binder jetting—takes place. An inkjet, analogous to that found on a 2D printer, applies a small quantity of liquid binder to the powder in accordance with the print pattern. The binder acts as a glue between individual powder particles, locking them together to shape a single layer of the print.

Then the powder bed moves down a notch, a new layer of powder is deposited, and the inkjet applies the next layer of binder. Layer by layer, the binder locks a 3D shape into place.

As you might imagine, the binder is a crucial element in binder jet 3D printing. For the last few years, ExOne has been researching the use of nanoparticles in some of its binders—an innovation which the company says can significantly improve printed parts.

“We’ve been adding nanoparticles to those binders for certain enhanced performance,” Hartner explained. “We’ve seen some increased interest from customers about how that’s going to help binder jetting get into larger parts, which our customers want, and better geometric stability, sharper edges, et cetera.”

The idea is that the nanoparticles in the binder, being smaller than the powder particles, can fill in some of the interstices between the powder. This enables greater part density, which means you can print larger parts with finer features and better performance.

“There are certain materials that we’ve printed before without nanoparticles, but we’re finding that we can get much better metallurgical characteristics of those materials if we use the nanoparticle as well as the materials themselves,” Hartner said.

ExOne is launching a new class of nanoparticle-infused binders that it calls NanoFuse alongside the new InnoventPro. According to Hartner, the new binders are starting to blur the line between binder jet printing and material jet printing, a 3D printing technique which jets out the material itself layer by layer.

“Traditionally, we have a powder bed and we jet out a binder that is a viscous liquid of some sort to bind the powders together. We tend not to jet out any materials other than that binder, which later goes away. With the nanoparticles, it’s getting closer to material jetting. The powder bed is still vital to the formation of the part, but we’re putting them together. And it delivers higher densities and improved performance,” Hartner said.

With binder jet 3D printing, you can print as many different parts as will volumetrically fit in your printer’s build box. The new InnoventPro, for example, offers two build volume options: three litres and five litres. This is a hefty step up from the 0.676 litres of the Innovent+, allowing for many more parts (or much larger parts) to be built in a single print. But if you really need quantity (or size), the X1 160Pro is equipped with a grandiose 160 litre build volume (and now you understand the name).

The printing process is only the first step in the binder jetting process. The object printed is called a green part, and it must undergo oven curing, depowdering and sintering before it’s ripe.

In tandem with the InnoventPro, ExOne has also announced a new automated guided vehicle called the X1D1 for the X1 160Pro. The X1D1 is an alternative to standard conveyance systems that will offer high-volume manufacturers a flexible automation solution for multiple X1 160Pro printers in a production system.

The X1D1 can insert and remove the printer’s 160 litre build box—which, when full of metal powder, weighs over 700 kilograms—and transport it to a curing oven, then an automated cleaning and depowdering station and finally to a sintering furnace.

The X1D1 isn’t the only way ExOne is moving toward Industry 4.0. The company has also been working with Siemens for the past two years to imbue its printers with Internet of Things (IoT) capabilities. Its newest printers, including the InnoventPro, are all compatible with ExOne Scout, an application built on Siemens’ MindSphere IoT platform to enable real-time machine monitoring and analysis.

“The machines that have been introduced since [the Siemens partnership] are using that technology. With that, you can query almost any data point, any sensor, any element of performance of the machine,” Hartner said. “Scout is a very flexible viewer into that data, such that you’ll be able to use that to make operational decisions. We anticipate writing applications on top of that, which will focus on yield or uptimes or maintenance. It gives you a lot of the basics right to begin with, but it can be taken a lot further.”

In addition to offering a larger build volume than the Innovent+, the new InnoventPro also features an upgraded printhead that will print over three times faster than its predecessor, topping out at 700 cubic centimetres per hour. The industrial piezo printhead is the same one found on the X1 25Pro and X1 160Pro.

ExOne plans to start shipping the InnoventPro at the end of next year and the X1 160Pro at the end of this year, with the X1D1 falling somewhere in between. Hartner is confident the new solutions will serve a growing desire for metal additive manufacturing.

“We continue to work really hard to deliver to our customers’ expectations and to move this industry forward,” he reflected. “We think it’s important that we drive continuous improvement and cost of ownership down. There’s a lot of hype in 3D printing, and we feel very confident in being the company that customers can depend on to deliver their solutions rather than just hype.”

To learn more about ExOne and its binder jet 3D printers, visit ExOne.com.