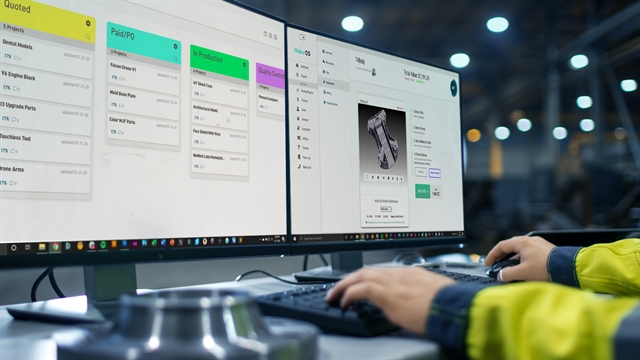 How to Modernize 3D Printing as a Service > ENGINEERING.com

3D printing is a service that could use an updated interface. (Picture courtesy of MakerOS.)


John Kray, the CEO and founder of Hydra Research, started the company in 2016 while still an undergraduate in the physics program at the nearby Lewis and Clark College, where he also studied music and environmental studies. They have no engineering program, he says, but there he joined two of his interests: 3D printing and open source. He maintains a small collection of desktop 3D printers, but his favorite seems to be LulzBot, a maker and open source movement favorite, that playfully uses an octopus as its animal mascot.


An octopus can regrow arms that are cut off. John is reminded of Hydra, the mythological, multi headed serpent that will grow two heads if one is cut off. Hydra’s business includes a 3D printer of their own making, the $2,500 Nautilus. But the company’s biggest source of revenue continues to be creating 3D prints for others.

As many would-be makers soon find, 3D printing is hardly as easy as buying a 3D printer, plugging it in and producing 3D prints. Plug-and-play gives way to “send-and-receive,” as in send file to a service bureau and receive the shipped part.

While John was perfectly capable of mastering the intricacies and temperaments of his 3D printers, the small firm—with no IT or development budget—was hard pressed to create a quote, order and ship customer-facing system for its website. With the market for 3D prints still emerging and growing, what was the likelihood that such a system would be available on the shelf?

In 2013, in another 3D printing service bureau, Mike Moceri realized that most of the work in creating a 3D print was not inside the printer but in the process. He had to receive the file, evaluate and fix the mesh, send a quote, produce the part, ship it and invoice for it. If ever a workflow could benefit from automation, this was one. However, with 3D printing a niche market, Mike realized that the only way an automated 3D printing quoting and ordering system was going to be built was if he built it himself. He went to the big(ger) city, New York, and created MakerOS, an operating system for makers.

MakerOS is licensed to service bureaus, such as Hydra Research, and works behind the scenes. A customer getting a quote for a 3D print will have no idea they are using the MakerOS platform – nor should they care. This is a practice commonly known as white-labeling, like a grocery chain slapping its own label on a can of corn.

MakerOS benefits from being in a time where 3D printing has emerged from its initial hype. 3D printers were to be in every home, the latest appliance, plug and play, print anything, from the knob that fell off your oven, to your food, to your organs. It is a more sober time, and even the public seems to have realized that such a future was a long way off and that the reality of 3D printing is you had to learn how to make 3D models and it was imprecise and slow.

The world learned 3D printing wasn’t easy. It was bleeding edge technology. You had to learn a messy process with new materials. And with all the parts that failed, how much was that part going to cost?

With consumers and makers, the last question came first. How much? But estimating the cost was not as simple as reading a menu. You had to send it to a service bureau where a technician, more accustomed to industrial customers than consumers or makers, would have to evaluate the incoming CAD model and estimate the cost. It was always an art rather than a science. It took days or weeks. A service bureau that needed to fill its vats with parts to make the per item cost the lowest would have to wait until enough one-off orders came in. Each part had to be carefully evaluated for overhangs and support structures that would be created in the vat and removed outside. The process lacked consistency. Different technicians would provide different prices.

Some services aimed to cut through the manual, friction-ridden workflow, but only for their own production facilities.

With MakerOS operating at a 3D print service bureau, anyone ordering a part can keep an eye on the cost as they step through the ordering process. You start by dragging an STL file (which your 3D modeling software will create) into the “load your file” area. You can also point to Dropbox, Google Drive or other online storage. Your model pops into view and you can twirl it around to inspect it. You select the material. It doesn’t take much more before the price pops up. No waiting for an emailed quote after days, weeks or longer. You don’t have to request a quote. You don’t have to call anyone, and no one will be calling you. The price is right there, on the screen! You are not locked in. You can keep playing with the parameters, such as “what if I used a different material?” The MakerOS program updates the cost without even requiring you to hit the Enter key.

Hydra adds a $10 “start-up” fee, but the total for the sample part used (see picture) never exceeded $20 total. Of course, your mileage will vary depending on the size and shape and other parameters selected.

Having done away with the laborious task of quoting, MakerOS solves the other service bureau’s tedious tasks one after the other. No need for invoicing, for example. MakerOS includes a full-fledged ordering system with a shopping cart, just as any modern online shopping service. A customer can also monitor progress of their order.

The MakerOS application was fully and seamlessly integrated on the Hydra site and, although we didn’t check out, everything else worked flawlessly.

Just as MakerOS simplifies pricing for makers, it also simplifies pricing for the service bureaus. Prices are listed on their site: $96 for the Professional plan (up to two seats and “a few projects”) and $239 per month for the Business plan (five seats). If you pay for the full year up front ($924 for Professional and $2,292 for Business) the price per month drops to $77 and $191 per month respectively. A quick ROI is all but assured when a service bureau compares the cost of MakerOS to the cost of bookkeepers that would have to do the invoicing and the technician who would be doing the quoting. See full pricing details here.

Save time. At the heart of MakerOS is the company’s AutoQuoter. With the ability to immediately read out the cost of the part to the user, it saves a service bureau from a tedious exercise often not rewarded with a sale. Quoting a part is done in real time. In addition to saving the technician’s time, you also save time in the back office, from where the bookkeeper would have to send out an invoice, wait for payment and record the payment—or in the worst case, the lack of payment.

Vision Minor, a 3D printing service in Irvine, in Southern California, makes use of the MakerOS application. According to Rob Lent, VP and cofounder of Vison Minor, not only does MakerOS eliminate manual quoting and invoicing, it helps them organize the business and communicate with the customer. It also provides data of performance that helps him make business decisions. The time they have saved has “translated directly to more orders being processed.”

Syncing with Clients. A service bureau’s communication with a customer is episodic: it starts with the order and ends with the part delivered, interrupted perhaps with a frantic “where is it?” from the customer. The MakerOS client portal and Communication Hub, on the other hand, can keep the customer informed of the status of the order and how it is progressing through a bureau’s process. In other words, the communication is continuous, not just at each end of the process.

As best business practices rely increasingly on data gathering and analysis, MakerOS helps by having all the data in one place. MakerOS, through one interface, will track completed orders, parts produced, gather information on new clients, and more—all from one dashboard.

Easy adoption and smooth interface.  It takes all of one day for one of the account managers to set it up and integrate MakerOS into a website.

For the latest generation of makers, the ease of use that MakerOS provides is expected. They have neither the time nor the inclination to pick up a phone to talk to anyone. Talking to someone is for emergencies, like a 911 call. Plus, makers are making on their own time and with irregular schedules. An email response, even one that is automated, will try their patience.